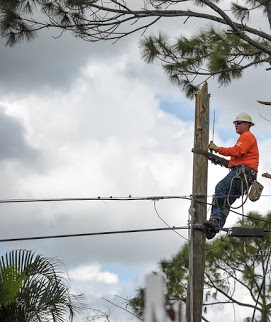 Indian Post interviewed PECO employee and UHS alumnus Mr. William Brown, the son of math and science secretary Mrs. Cyndi Brown.  Mr. Brown explained that he got involved with PECO, an electric utility company based out of Philadelphia, because he had been working as a contractor, and his father worked at PECO as well.

Some employees, like Brown, went down to Florida to assist victims of Hurricane Irma by helping restore power. According to Brown, this opportunity was in a way "a favor for a favor" because Florida utility companies came  up to assist PECO after Hurricane Sandy in 2012.

Mr. Brown remarked how the people in the South were so friendly and genuinely thankful and said how people went out of their way to see that the workers' needs were met by bringing them water, buying them meals, and seeing if they could do anything to help.

The people were more worried about the workers than their own power, whereas in Pennsylvania, Brown said, people become frustrated and complain when their power is out for eight hours.

One of his favorite memories from working in Florida was restoring the power to a husband and wife, the wife being nine months pregnant. Luckily, the PECO workers were able to get a line from the street that had power and connect it to a transformer and get that family their power back.

Brown admitted that he and his family had some worries before going down to Florida. He said leaving his wife and two children was the hardest part of going down to help restore power. His two kids started kindergarten this year and were very nervous about his being away, but added that all those worries went away after a quick FaceTime call.

He said that the biggest lesson he has learned from his trip is that safety is important. The people didn't know what challenges they were going to face that day and just being safe helps in the long run. He also just wants people to be patient with companies like PECO because they are trying their best to restore power as quickly as possible.